A young boy finds a powerful otherworldly weapon, which he uses to save his older adoptive brother from a crew of thugs. Before long, the two of them are also pursued by federal agents and mysterious mercenaries aiming to reclaim their asset.

While scavenging for copper wire, Detroit teenager Eli Solinski stumbles upon a high-tech gun that holds special powers. When his brother, Jimmy, lands in trouble with a local crime boss, the two siblings take the mysterious weapon and go on the run. Eli and Jimmy now find themselves in a life-and-death battle against an army of thugs and two heavily armored, futuristic soldiers who want their gun back. 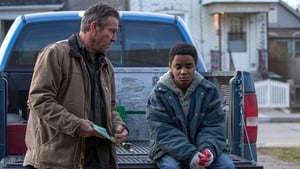